Introduction. The Fouad Boutros project by the Beirut Municipality is a 4-lane highway that stretches from Spinneys Achrafieh to the Beirut Port and aims to improve traffic conditions in the severely congested Achrafieh district; it is estimated at $75 million. The project dates back to the 1970s, but was pulled out of a dusty drawer in 2012 and approved for execution. This has sparked active public opposition by citizens, NGOs, and experts who have formed a Civil Coalition.

Despite the protests and petition signed by over 3,000 people, the municipality has refused to engage in dialogue or acknowledge the proposed alternatives. Regardless of the actual highway and its consequences, the way the project and the opposition to it have been dealt with by the municipality are an accurate exhibit of inefficient mentalities in the public sector. Here, I continue my coverage of the project which I started in a previous post entitled “Let’s Talk About the Fouad Boutros Project“.

At the outset of public outrage and opposition to the Fouad Boutros project, the Beirut Municipality clung to its assertion that it already owned all the land needed for the highway – since the 1970s. As hundreds of people took to the streets in protest last year and activists launched vigilant campaigns, municipality officials proclaimed that all those still living on those properties were doing so illegally. The fallacies and loopholes in their claims have since been exposed.

According to the Council for Development and Reconstruction (CDR), the municipality began expropriating land for the highway in 1966, and had taken the route between Charles Malek Avenue and Armenia Street by 1975. The outbreak of the Lebanese Civil War then brought the expropriations to a halt.

Less than 40 years later, the project is back on the table, but the municipality still needs to expropriate additional properties that weren’t part of the original plan if it wants to make the highway a reality. Consequently, the decree for their expropriation was signed in 2012.

That being said, even some of the property owners who were compensated back in the 60’s or 70’s have yet to receive the full amount due to legal provisions stating that final settlements are due at the start of development.

We can therefore conclude that the municipality’s claim of owning all the needed land is baseless. That it goes further and accuses the residents of living there illegally is unsettling.

The exact number of houses and properties slated for either partial or full destruction remains unknown, but it is estimated at around 32. Antoine Atallah, an architect, urban planner and member of the Civil Coalition against the highway project “Hekmeh-Turk” axis, conducted his own impact study and ended up with the same number by directly superposing the proposed highway’s path on a map. But because the municipality’s plan is unclear, he believes that there could be more.

Raja Noujaim, general coordinator the Civil Coalition, affirmed during the coalition’s latest press conference that the municipality fully owns only 10 houses and 5 properties. In his talk, he emphasized that the highway will create severe accessibility problems thereby harming several houses and plots of land beyond those that will be physically demolished.

This brings us to the question of the cost. Since the project was last modified and adopted under Decree 8228 in 2012, the municipality has repeatedly insisted that its estimated cost is $75 million.

Various stakeholders have voiced their distrust with this number and continue to come forth with their own projections by including factors that the municipality has not taken into account. Executive Magazine, for instance, estimated that costs will reach around $100 million, based on the input of real estate experts. Noujaim, speaking on behalf of the coalition, has claimed that it could go up to $200 million.

There is good reason to believe that the municipality has considerably underestimated expropriation costs, not only because of the points mentioned above, but also due to two major legal factors:

1- First, when the municipality wants to transfer a portion of your land to public property, it has to make sure that what remains of the land is viable –  i.e., big enough to be built on or exploited.  If it isn’t viable, then the owner has the right to demand that the municipality expropriate and pay for the entire plot of land.

“At first, [the municipality] imagined expropriating the land precisely on the path of the highway, and that’s how they did their cost estimation,” Atallah said. After accounting for the properties that the municipality will be forced by law to buy completely, not partially, the cost rises dramatically.

2- Second, the municipality is allowed to take up to 25% of any land for free so long as the land will benefit from the development. However, this does not apply if the new road doesn’t provide the land with benefits such as more accessibility, especially in the case of tunnels, bridges, closed structures, and all their components. This is exactly the case for the Fouad Boutros project. After all, it consists mostly of bridge and tunnel components, service roads, and small side roads.

The planned highway will not facilitate accessibility and will even reduce it in some cases, according to the coalition, especially in its northern section and around Charles Malek Avenue.

The fact that the expropriation committee will have to take into account all of these factors is the main reason why the cost is expected to skyrocket well above $75 million. Expropriation normally happens on a case-by-case basis, beginning with a judge who sets an official compensation amount, and followed by a committee – a number of experts plus another judge – that rules on the need for the land. The judges have started considering the cost-increasing factors in the case of the Fouad Boutros project, and have already made several rulings in favor of the home or property owners.

Pending results of the environmental study

From a legal perspective, this isn’t the end of the story. According to a recent 2012 law, projects like the Fouad Boutros highway cannot be executed without an environmental study and the approval of the Ministry of Environment. In support of the coalition, the ministry assigned the ELARD company this task and the environmental study is currently in the scoping report phase – meaning they are still deciding what they’re going to study, not conducting the actual environmental assessment. This alone could take up to seven months.

While the municipality should technically be sitting on its hands right now and waiting for the results, the coalition has repeatedly accused it of beginning with expropriation, the first step of implementation.

This environmental aspect of the project has recently been the source of significant hype in the media as well as the cause of civil society’s loudest concerns. While understandable, the fact that the lack of a traffic impact analysis has not been equally highlighted is disconcerting.

For the Environmental Impact report by the Civil Coalition, click here.

The Orchard – To be demolished (credits : Naji Assi/The Civil Coalition)

The Orchard – To be demolished (credits : Habib Battah/The Civil Coalition)

The Orchard – To be demolished (credits : Naji Assi/The Civil Coalition)

A company called TMS Consult is supposed to be in charge of preparing a traffic study in parallel with the environmental assessment, but questions regarding the study remain unanswered. Has it already started? When will it be done? Will the results be available to the public? Shouldn’t this be the major determinant of whether or not the project is executed?

The municipality’s main, and overused, talking point is that the highway will improve traffic conditions, and activists cry foul in return, saying it will increase traffic instead. How can we, as the public, make decisions without proof and without an adequate traffic impact analysis?

The most recent traffic model for Beirut dates back to 1995. “There are so many things that have drastically changed since then,” a traffic expert at TEAM International, the chief consultant of the city’s 1995 transportation plan, told Hummus For Thought. Indeed, the country was just coming out of the destructive 1975-1990 Civil War. In comparison to today, barely anyone crossed the demarcation line that separated East and West Beirut, and the Downtown district was virtually nonexistent at the time: all key factors with tremendous impacts on our traffic patterns.

Additionally, the 1995 traffic model only made projections for 2015, essentially meaning that nobody has a clue what happens to traffic in Beirut after next year. Creating a new traffic model rather than updating the old one is therefore an urgent necessity and an optimal solution, something that experts at TEAM have repeatedly stressed on.

While the CDR claimed that a 2001 traffic study for the highway was updated in 2011 proving that it will alleviate traffic, they have declined to say any more. From citizens and NGOs to journalists and interested experts, nobody has been given access to technical studies at any point.

With no official data available, the civil coalition against the highway has tried to make sense of the project’s real impacts and to keep the public aware of them. This is the chief agent that has delayed the project until now. Yet, it is also worth questioning whether it will be enough on the long run.

The public sector has shut people out on the basis that it’s not customary to disclose this kind of information, that there’s no mechanism to do so, and so on – a testament to the municipality and the CDR’s lack of transparency, the archaic disregard for the importance of public consultation, and the blatant indifference to people’s concerns.

This is at the heart of the ordeal with the Fouad Boutros project. There can be no educated public discussion about the highway, or about any other project that affects every one of us as citizens, without evidence, studies, data: anything but empty rhetoric.

For the Traffic Impact Report by the Civil Coalition, click here. 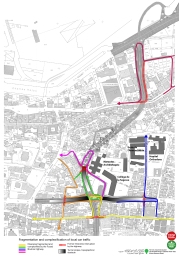 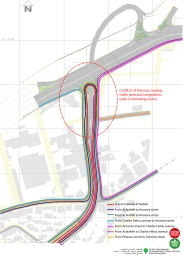 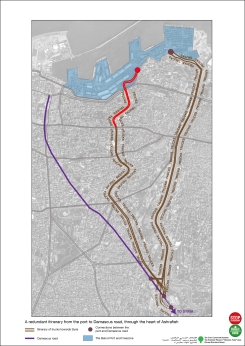 If you wish to view our coverage of the Fouad Boutros project, please click here. For the Civil Coalition’s collection of media coverage, click here.

Ellen Francis is a writer, a researcher, and an AUB student in Civil Engineering and Media Communication. She has been published in The Daily Star, various student publications, and on her Blog. Follow her on Twitter @rhymeswithellen.