Layla was the first women’s magazine to be published in Iraq. Launched in 1923, the magazine dealt with new and useful matters related to science, art, literature, sociology, and in particular to child-rearing and the education of girls, family health, and other matters pertaining to home economics. The establishment of national rule in Iraq was followed by the emergence of several magazines and newspapers dealing with women’s issues. Layla marked the beginnings of the women’s press in Iraq, and the magazine is credited with being one of the factors in the emergence of the Arab women’s movement. Published under the banner, “On the Way to Revival of the Iraqi Woman,” the magazine disseminated news about culture, education, and family affairs, as well as led a campaign for the liberation of women. Its editorial features included “The Crucible of Right,” “Tax News,” “Housewives Corner,” “Strange News,” “Rings of Magic Strings,” and others. The magazine also was concerned with medical research, literature, and poetry, and published works by the well known Iraqi poets al-Rasafi and al-Zahawi. One of the most important articles to appear in the magazine was the editorial, printed in Issue 6 on May 15, 1924, addressed to the Constituent Iraqi Assembly, asking it to grant women their rights. Layla published only 20 issues. Its last issue, dated August 15, 1925, included a sad article explaining to readers the magazine’s difficult financial situation. Soon thereafter, owner Paulina Hassoun left Iraq and the magazine ceased publication.

– Information from the World Digital Library.

The below images are just samples. To see all of them, click here 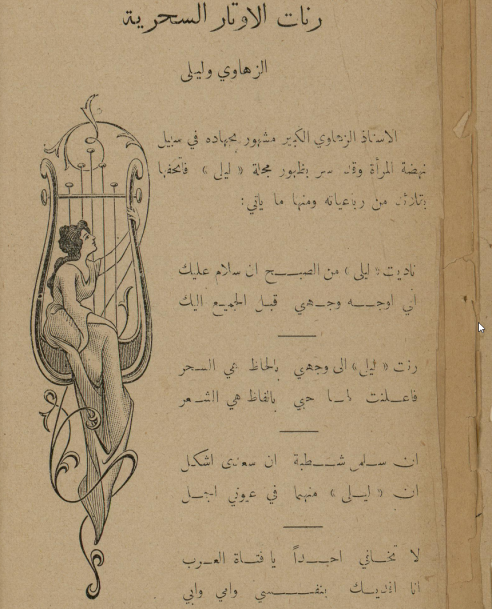