It cannot be easy. To know that you’ve participated in something which you would never be able to justify can rip one’s conscience apart. Many fall into self-medication to treat for mental illnesses of the likes of depression and PTSD; others isolate themselves and become socially dysfunctional; others kill themselves. But every once in a while, witnessing something so sad, so brutal, so unjust, can turn you into a passionate defender of human rights. And that’s what Ross Caputi is.

I haven’t known Ross for a long time. But time wasn’t really necessary to realize how passionate he is. This is a man who genuinely desires to help humanity by helping Fallujah. He started with the Justice for Fallujah project which lead to the documentary Fear not the Path of Truth: A Veteran’s Journey after Fallujah. Fear not the Path of Truth which will be screened tomorrow at the American University of Beirut and can be found for free on Vimeo, is his story of Ross Caputi, that of an ex-US Marine who served in Fallujah from 2003 to 2006 and took part in the second siege of Fallujah in 2004. In 2006, he was discharged for being too critical of the US military. 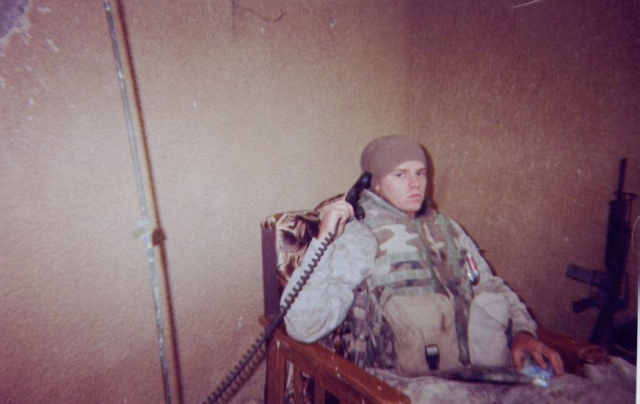 Why? What made him change his world view in such a radical way?

In his own words:

Ever since I started the Justice For Fallujah Project, I’ve been looking for new and creative ways to inform the American public about what our military did to Fallujah. Not just because I feel complicit and this whole topic is extremely personal to me, but also because I think that understanding what was done to Fallujah is essential to understanding US foreign policy. If Americans really understood what we did to Fallujah, they would have at once understood that all of Obama and Kerry’s arguments for intervention in Syria were hollow and hypocritical. Americans would also better understand our current relationship with the Maliki government in Baghdad, and they would also be a step closer towards understanding the widespread resentment towards American foreign policy throughout the region, and throughout most of the world too.

I’ve been wanting to do something like this for a while, and then the opportunity just suddenly presented itself. After our organization was featured in an episode by Vice on HBO, we got some generous donations. It was enough to buy a camera and book a plane ticket to Europe, where I conducted most of the interviews for this documentary.

So what are you hoping to get out this?

I’ve had very big and romantic dreams about the effects that my documentary could have. At night I imagine the military industrial complex crumbling and the American public suddenly becoming motivated to further inform and empower themselves. Most likely that won’t happen. But if it at least motivates a few people to help Fallujah, I’ll be happy with that. The Justice For Fallujah Project is currently looking for ways to send aid and medical equipment to the Fallujah General Hospital. But we don’t have enough manpower right now. We need more people to help us.

So if this documentary just helps us find a few dedicated people to help our organization, that would be great. Our less immediate goal is to continue to fight against the narrative told by the US government and the mainstream media about what we did to Fallujah. Most Americans still believe that Fallujah was a sanctuary for terrorists in 2004 and the US military came and liberated the city from their oppression, which is just a complete lie. So I would be very happy to see any type of reaction to our documentary from the mainstream media. I would love for someone like Bill O’Reilly to rail against our documentary. If we are totally ignored by the establishment media, I would feel like we didn’t challenge anyone.

But we’ll have to see what happens. I’ll try to enter the documentary in film festivals for the spring. Hopefully it will get some attention.

The most important thing I have to say about my experience as a veteran in Fallujah is how astonishingly ignorant I was of Iraqi culture, Iraqi history, and what was happening in Iraq while I was there. Yes, I saw some bad things in Fallujah. I saw us using indiscriminate tactics. I saw women and children fleeing into the desert from our assault. But if all you know about what you’re doing and why you’re doing it are the justifications that your command gives you, it is very easy to interpret all of the things that we did in Fallujah as an attempt to help Fallujah civilians.

I interpret what I saw in Fallujah very differently today, because I’ve done a lot of studying and research on the topic. I now understand that Fallujah was not filled with terrorists, but rather with predominantly local resistance fighters who wanted to expel the illegal invaders and occupiers from their city and country. I now understand that we were the aggressors every step of the way and we rejected made by the leadership in Fallujah for a peaceful resolution. I now understand that thousands of Fallujans were trapped in Fallujah at the time that we were laying siege to the city (our command told us that only terrorists remained in the city), so many all of our tactics were indiscriminate and, therefore, constitute war crimes.

Finally, here’s the list of people interviewed for Fear not the Path of Truth:

Feurat Alani, son of Amir and producer of “Fallujah: A lost Generation?“

Dr. Intisar Ariabi, formerly the head Pharmacist of the Yarmouk Teaching Hospital in Baghdad, and currently a Director at The Cancer and Birth Defects Foundation. Dr. Ariabi is also a co-author of the very important study Cancer, Infant Mortality and the Birth Sex-Ratio in Fallujah, Iraq 2005-2009.

Dr. Muhamad Al Darraji, biologist by profession, and formerly a member of the Fallujah City Council in 2004. Dr. Al Darraji has worked extensively with the UN Human Rights Council to address the human rights violations committed against Fallujah. He is the author of several publications, including “Testimonies of Crimes Against Humanity in Fallujah“. And he is the Director of the Monitoring Net of Human Rights in Iraq and the Conservation Center of Environment and Reserves in Fallujah.

Dirk Adriaensens, criminologist, writer and activist. He is also an Executive Committee member of the BRussells Tribunal. Between 1992 and 2003 he led several delegations to Iraq. He was a member of the International Organizing Committee of the World Tribunal on Iraq (2003-2005), and he is the co-author of several books and articles for numerous newssites.

Professor Kathreen Malley-Morrison, professor of Psychology at Boston University. She is well known in the new field of Peace Psychology. She also runs the blog Engaging Peace. Check out her posts on “moral disengagement” and consider this theory’s application to the atrocities committed against Fallujah.

Paul Atwood, senior Lecture in American Studies and is a Research Associate at the William Joiner Center for the Study of War and Social Consequences at UMass Boston. For over twenty years Paul Atwood has been teaching courses on American wars of the twentieth century, with emphasis upon the social, politcal, and economic consequences to the United States and the even more bitter costs to those nations on the recieving end of American firepower. He is the author of War and Empire: The American way of life.

Sohail Hashmi, professor of International Relations, whose research focuses on the ethics of war, especially on the tradition of jihad. Our interview focused on the tendency of the War On Terror to conflate insurgents, jihadists, and terrorists into a single category of “enemy”. We discussed in depth how such a dangerous conflation may have contributed to the bloodshed in Iraq and Afghanistan.

Recommended Reading: I’m sorry for the role I played in Fallujah – The Guardian

Tomorrow’s screening will be followed by a panel discussion with Dr. Coralie Hindawi (PSPA Department) and Dr. Vijay Prashad (CASAR Department) of the American University of Beirut. The Kickstarter behind the documentary can be found here.

Fear Not the Path of Truth will be screened tomorrow at 6:30 at the American University of Beirut. Here’s the link to the event.

One thought on “Fear not the Path of Truth: An encounter with Ross Caputi”