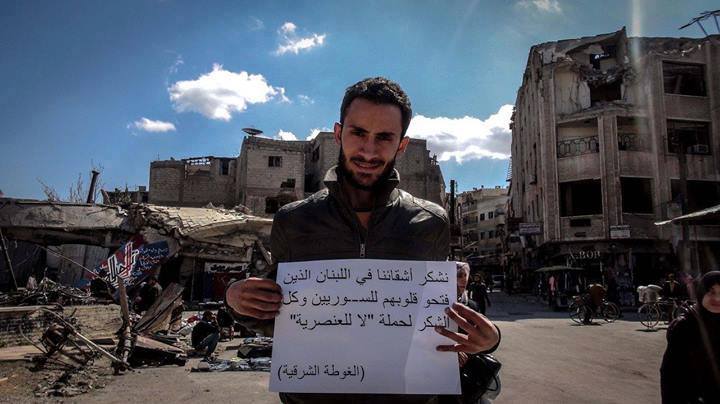 There is something truly bittersweet about this picture of a Syrian man thanking the Lebanese Anti-racist activists that are behind the “Campaign in Support of Syrians Facing Racism” (Arabic: الحملة الداعمة للسوريين بوجه العنصريّة). I’ve been deeply touched by the ongoing campaign which seeks to promote a unified sense of humanism rather than the a-historical discourse that embodies nationalism and its racist consequences.

The man, whose identity remains unkown, is seen holding a sign in the besieged (by the fascist Assad regime) city of Ghouta reading:

I don’t know who this man is and I can only imagine what it must feel like to live where he lives. I’m just happy that, in the midst of mess we live in, people are willing to Stay Human.

For more info, you can visit the campaign’s Facebook page (Arabic) as well as visit the similar (in spirit) I Am Not A Tourist campaign started by Tanya Khalil.